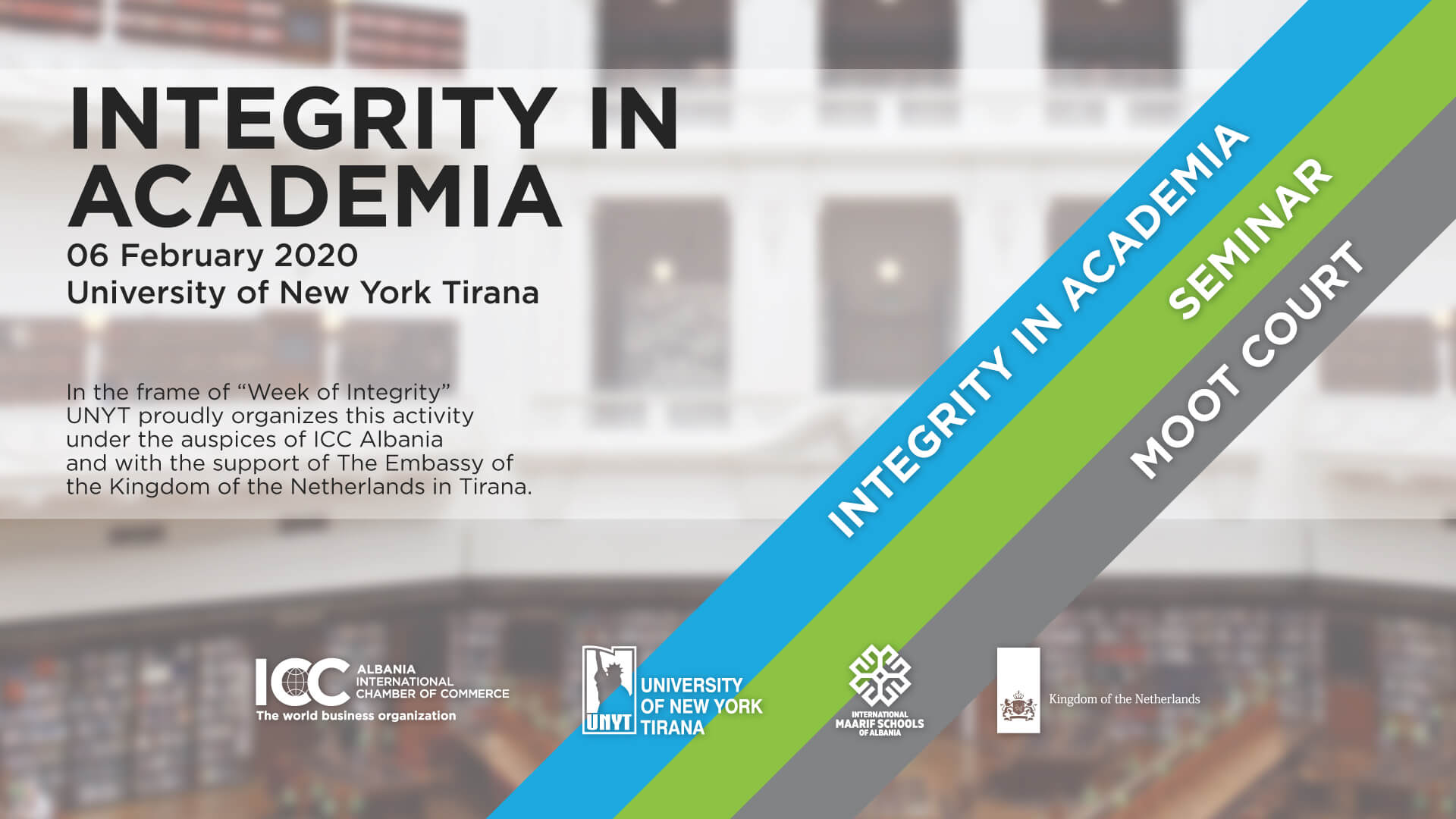 In the frame of “Week of Integrity” UNYT is proudly announcing the Academic Seminar “Integrity in Academia” and “Moot Court Competition in Human Rights & Integrity with a focus in Refugee Law”.

In cooperation with ICC Albania and with the support of The Embassy of the Kingdom of the Netherlands in Tirana, University of New York Tirana will organize the Academic Seminar “Integrity in Academia” in the context of the Week of Integrity. During this session, panellists will delve into problems of integrity within the education sector as well as what actions have already been taken by academia and other organizations until now. In addition, the panellists will discuss initiatives of state institutions on this matter, the most important needs of the sector, and the gaps that the regulatory framework has in this aspect. Experts will also explore an important recommendation during this seminar: the need to include a course on ethics within each major to increase professional conduct for students studying that major.

In the second session, UNYT will organize the Moot Court that will address the most pertinent and topical questions relating to integrity and international refugee law, drawing on the current crisis situations. It is designed to encourage students to learn and understand the fundamental concepts of human rights, integrity, with a focus in Refugee Law by addressing concrete legal problems and practice their legal argumentation in front of experienced jury members. Main themes of this year’s competition include the right to the integrity of education, right to education; contemporary challenges related to the conduct of hostilities; human rights issues including the principle of non-refulement, refugee law etc.

Mrs. Olldashi has a wealth of experience in the academic field as well as a lawyer, a position she held during 1996-2002 as a lawyer at the Rectorate of the University of Tirana. From 2002 onwards she has been a lecturer at the Department of Public Law at the Faculty of Law, of the University of Tirana, as well a lecturer at the University of New York in Tirana. She is the author co-author of many scientific papers and articles in national and foreign journals and has presented numerous papers in many national and international scientific conferences. She is an external expert of the Agency for Quality Assurance in Higher Education (ASCAAL) (since 2009).

In addition to scientific and academic research, Mrs. Olldashi has extensive work in human rights protection. She has worked as a legal consultant/expert for several national and international organizations.

Dr. Kalemaj has obtained his PhD in Political Science, with a specialization in International Relations at Central European University, Budapest, Hungary, where he also received his MA in European Studies. In addition, he has obtained a B.A. in International Relations/ Political Science, New York in Tirana/SUNY/Empire State College and an LLM from University of Tirana/ Faculty of Law. Dr. Kalemaj also has obtained the Lawyers’ License from Albania Bar Association. His expertise is primarily in the areas of comparative politics, international relations, European studies and international law & diplomacy.

Dr. Kalemaj has published five books, three of which monographs and more than twenty peer-review journal articles and book chapters. Ilir is also active publishing in academic journals, and has extensive experience as a freelance writer, regularly contributing to the national and regional press.